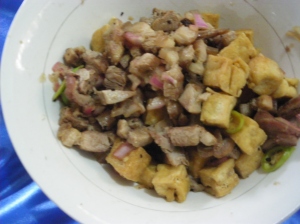 This is one dish that I can do in my sleep. It has been 2 decades since I first tasted this dish, when my mom,  a pork vendor, decided to try out  a way to dispose of the pig heads she couldn’t sell. That was also the first time I tasted beancurd (tokwa) and it was love at first taste.

For this recipe I used about 200 gms of pork liempo which I boiled in salted water until well done. Afterwards, I fried it in some oil until brown on both sides. It would be better if one uses pork head or pork ears — boil that then grill — but cleaning and preparing a pork’s head with the snout and ears would entail more work and I’m not feeling up to that today. Slice the fried pork into small pieces then set aside. Four squares of tokwa would do for this dish. Tokwa costs about 4 or 5 pesos in the wet market. Cut it into small cubes and fry until golden. Drain it and set aside.

The key to a good tokwa’t baboy is the the sauce, particularly, the proportion of soy-sauce and vinegar. I usually just estimate the amount I use, and then taste the concoction until I am satisfied. But since a recipe to be followed need adequate instructions, I propose to use 1 part soy sauce to three parts vinegar. For this recipe it’s 1 cup vinegar to 1/3 cup soy sauce. That will ensure that the sauce won’t be too salty. It would also be wise to add 2 tbsp of red sugar to the mixture to temper the sourness of the vinegar. Add a pinch of crushed black pepper and stir. You can add a pinch of salt but I prefer not to do that since the pork I used was already salted. Finely chop a medium red onion (the white one is not as flavorful), and a piece of green  finger chilli (or “siling haba” in local parlance). Throw that in into the sauce and mix well.

You can serve the sauce on the side or mix the pork, the tokwa and the sauce together before serving. I personally prefer the latter because it’s more flavorful.

This serves 2 and would be a great accompaniment to lugaw or arroz caldo. Bon appetit!

I was pretty stressed up lately. I am in a transition phase in my life and I hate the feeling that I don’t seem to know where it’s going.

One of the things I love to do when I’m  stressed is to cook. I love the routine of chopping up ingredients, the hiss and sizzle of the pan calm  my nerves. So even if it was 7 am I went ahead with my ampalaya with pork. So this will be both breakfast and lunch for today.

Ampalaya with pork  (good for 2)

The fat and the meat of the pork must be separated first. I wanted the fatty part drained of oil so I usually boil it with a little water then fry it until it looks like chicharon. I drained about 1 tsp of oil from the fat of  1/4 kg of pork laman. I then added olive oil for flavor and then sauteed the garlic, onion and tomato. I added the pork meat and let it cook, occasionally mixing. When the meat was half cooked, I added the ampalaya and stir-

fried it with the meat. I seasoned it  with pepper and soy sauce and voila! A not-quite-usual breakfast eaten with piping hot rice.

I love coffee. I love it black or with cream. I love drinking it with something sweet like Krispy Kreme doughnuts.

I just consumed the last of the Kona coffee I bought in Hawaii last January. I have to remember to call my mother in law and ask her to send some of that barako beans she has with her.

We tend to believe that coffee is bad for us but  literature abounds regarding its beneficial effects. It contains antioxidants, chemicals that may play a role in delaying aging. It has been documented to have protective effects against Alzheimer’s disease and Parkinson’s disease, both brain diseases common in the elderly. Although documentation is unclear, coffee was drank as early as the 6th century in Africa; in the 17th century it caught up in the Arabian peninsula and started to be enjoyed in Europe particularly Venice in the 1700’s.

Ah coffee, one of my passions. Got to drink this cup. More on this topic later.