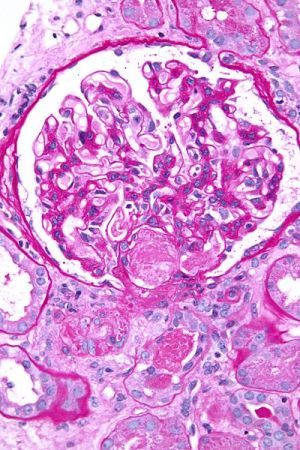 Acute thrombotic microangiopathy, a microscopic feature of DIC. The image is quite beautiful if it’s not so very tragic, don’t you think? Picture from Wikipedia

In medicine, there is an entity called  “disseminated intravascular coagulation” or DIC. It is a complicated condition when a lot of systems in the body break down due to one (or more) disease condition. In short, it is the complete collapse of civilization, as far as one’s organic hardware is concerned.

Syria (the country) is currently undergoing a malady that is a lot like DIC.

The treatment for DIC is “reversal of the underlying cause”; the prognosis is often grim and chance of survival depends on the “underlying condition”.

The problem with Syria is that the “underlying condition” to its current pathology is varied, multifactorial and has a long complicated history. Like a lot of Middle East countries that have undergone the so-called “Arab Spring”.

I satisfy (or torment) myself  in reading the following articles on the matter:

Mr. Randy David, a Filipino sociologist, is sympathetic; or maybe empathetic is a better world, since he (and I)  and his (my) country have also experienced the  travails, pathos and tragedies (sometimes, there is comedy — albeit the farcical kind) that any type of revolution can curse (or bless) its chosen people.

“In spite of our pressing domestic problems, we must find time to reflect on our responsibilities as citizens of a common world. It behooves nation-states to exhaust all peaceful means to protect the basic rights of ordinary people and allow nations to settle their internal troubles in a nonviolent way. The use of military action against another country is an act of aggression. Its outcomes can never be limited or predicted.  As vital as the votes of parliaments are in finding a solution to this problem, the voice of the global community of netizens must be heard now more than ever.”